Veronica Charlesworth was born in London in 1952.

Veronica studied drawing at Twickenham College of Technology, and etching, screenprinting and graphic design at the London College of Printing, obtaining a BA in graphics. After finishing college, she lived in Scotland where she worked as a graphic designer for a year. On returning to London in 1974 Veronica set up a workshop with two fellow artists producing original lithographs and screenprints. In 1979 she married a painter Michael MacDonagh Wood and settled in the Cotswolds.  Veronica now works prodominantly in water colour. She finds the medium well suited to her dramatic floral studies, particulary of irises. Other favourite subjects inlcude her collection of ceramics, and gardens seen on her travels in Europe. She is particulary interested in the play of light and shade, and the relationship between plants and architecture. Her paintings have been exhibited widely in Britain, Europe and the United States, and published by major international publishers as prints and greeting cards. Veronica works with a craftsman printer to reproduce her watercolours as signed, limited edition prints. Only the finest materials are used. Due to the use of lightfast inks your print will be as resistant to colour change as modern technology can achieve. The paper is acid-free so it will not yellow and you will be able to enjoy your print for many years. 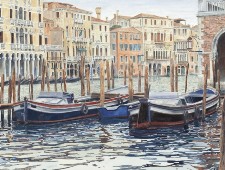 Michael studied Art and Design at Twickenham College of Technology and painting and printmaking at Hammersmith Art School. In 1976 he attended Whitelands College of Education and Gorham College, Maine, USA where he specialised in photography and qualified as an art teacher in 1979. The same year he married Veronica Charlesworth, herself an artist. Michael and Veronica settled in the Cotswolds and for the next six years Michael concentrated on developing his skills as a print maker, producing limited edition screenprints and etchings. In 1987 Michael visited the beautiful Greek Island of Paxos where he rediscovered his love for painting, producing a series of evocative sunlit landscapes. His water-colours display an eye for detail and an intense use of colour whilst remaining fresh and lively. Following the success of his Greek paintings Michael has travelled widely in Europe. Venice is now a favourite subject and he prefers to paint the backwaters away from the bustle of the tourist sights. The beauty and mystery of the famous city are captured by Michael's accurate draughtmanship and masterly rendition of the reflected architecture. In France the neglected villages of the rural south, their faded ochre houses nestling harmoniously in mediaeval landscape, particularly inspire. Michael's work has been exhibited widely in Britain and the United States. Michael works with craftsman printers to reproduce his watercolours as signed, limited edition prints. Only the finest quality materials are used. Due to the use of lightfast inks your print will be as resistant to colour change as modern technology can achieve. The paper is acid-free so it will not yellow and you will be able to enjoy your print for many years.
Click here to view more of Michael's Work